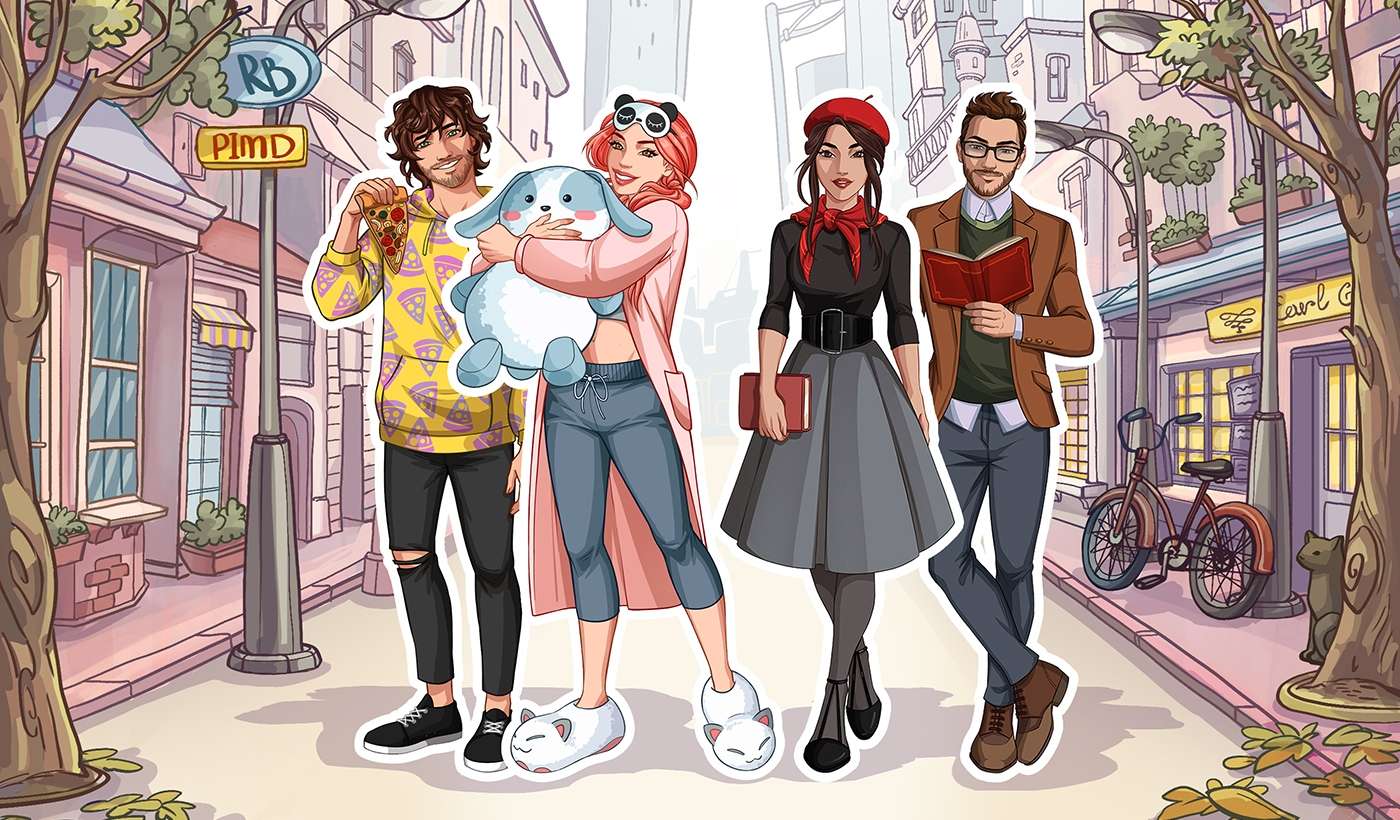 Stylized Graphics vs Realistic - what to choose?

Mobile games typically require various essential decisions to arise better in their currently saturated market. An attention-grabber game in this niche should contain optimal tech requirements, processing speed, exciting SFX and music, available resources, and straightforward gameplay. Such as in any type of game, creative choices will strongly impact a game’s release, especially among the targeted audience. Therefore, one of the leading front pages of a mobile project will be its graphics.

Graphics can vary hugely; you can have a serious-looking RPG such as “Vampire’s Fall” or something cuter like “Stardew Valley;” you can even have cartoonish-like games with the looks of “Fallout Shelter.” Either way, the graphics’ kind of art and expressionism will perfectly bridge a relationship with the audience, especially during the first contact with gameplay. For that reason, we’ll discuss here a few points to make when prioritizing stylized graphics for mobile games. But first, let’s go briefly through the concept of “stylized graphic.”

What is a Stylized Graphic?

The mobile Battle-Royale “PUBG Mobile” features a more serious-looking art style, which means its graphics aim better towards realism. The game’s characters and objects depict dimensions and physical attributes similar to those in the real world. Consequently, in-game animations follow the same path. The highly successful Battle Royale is eye-soothing, and most mature audiences quickly become fond of the game’s graphics and gameplay.

Still, when dividing graphics into two categories, realistic and stylized, the famous Battle Royale game falls into the former section. On the other hand, a stylized graphic will often display a unique characterization and interpretation of its universe’s physical properties. So, looking at games like “Hay Day,” “Fallout Shelter,” and even the popularly adored “Subway Surfers,” you’ll notice how the entire world mixes realism with an authentic art style.

Basically, we're talking about distorted proportions of the characters that emphasize specific features of their appearance, thus making it exaggerated, cartoonish, or even cute and casual:

To summarize, games with stylized graphics often have unique aesthetics and tend to highlight expressions and movements in their own way. You can notice this by looking at the chicken’s unnaturally huge but cute eyes in “Hay Day,” for instance. So, which one to choose? This answer will solely depend on your project and what you feel would sit nicely with it. Although the debate of which is better could stretch for infinity, we can at least focus on the benefits of choosing one of the options. Therefore, let’s understand how advantageous it is to use stylized graphics for a mobile game

The stylized art style, albeit more modest-looking, can substantially positively impact the capture and solidifying of the player audience. For instance, games like “Subway Surfers,” “Clash Of Clans,” “Genshin Impact,” and “Ragnarok Mobile” are amongst the top played games currently both on the App Store and Google Play Store. Not to mention that all games with stylized art fall into a Play Store and App Store category, known as “Stylized Games.” So, having the game featured in this prestigious segment can attract more players.

Studying the target audience of a game can yield much information about its positive strategies. It’s no mystery that most children and teen media present goofy, cartoonish, and unique art styles. So, by picking a mobile game that aims towards children and teens, you’ll likely benefit from making it with stylized graphics since it’s what they are used to seeing on television, the internet, and social groups. Besides, that would fit the gameplay as it’s probably a bit goofy considering the primary audience.

In addition, you can even reach out to older audiences by working a stylized art style that it’s not cartoonish and has more sober gameplay. For instance, “Ragnarok Mobile” features manga-like characters and objects, which also fall into the “Stylized graphics” category. So, since many adults have a liking for anime and manga, they’ll show interest in playing a game featuring a similar style.

From this perspective, it’s safe to assume that games with stylized graphics can be a good fit for a vaster audience, englobing children, teens, and young adults, as is the case with games such as Team Fortress 2 on PC and Subway Surfers on mobile. Still, there are many other benefits that stylized graphics can promote, especially concerning the gameplay experience. Let’s dive further.

As aforementioned, stylized games often will include more opportunities to feature goofy scenes and characters, making the gameplay more comically rich. Yet, crucial in-game information can also receive benefits from stylized graphics. For instance, “Team Fortress 2” was supposed to have realistic graphics, but the developers soon noticed that identifying the enemy class with realistic graphics can take longer. So, the TF2 team realized that a game with classes and twitch action wouldn’t benefit as much with realistic graphics. After many years of its release, it’s fair to say that they hit it right by the game’s ever-lasting success. Additionally, in realistic games, any hiccups or jaggies will be more judged by the audience since they’ll harm immersion more.

Surviving The Test of Time

If a project aims for realism, chances are it will hit it right on the release. However, since realism-rich graphics in video games are constantly evolving, a previously realistic game may lose its magic after a few years, when most games then provide higher levels of detail and reality-centered objects and textures. On the other hand, games with stylized graphics are prompt to last longer since they’re not really competing in terms of realism. For instance, PC games such as Oblivion and Morrowind are in the process of looking a bit dated. Meanwhile, the Nintendo GameCube hit, Wind Waker, still looks fabulous. To summarize, good distinctive art will look good even after a decade, while realistic graphics may look degraded after the same time.

Stylized graphics can open the door for your game to shine a bit more. Of course, this will highly depend on the genre. For example, notice how realistic graphics have been overused in FPS games. Many FPS games aim for realism, making it a saturated category. Now, glimpse how Borderlands, a successful series, makes FPS slightly different by applying toon graphics. Additionally, some newly released PC games such as Valorant and Overwatch also feature stylized graphics, proving highly fruitful by both games’ current success. For mobile, the same approach on an FPS has the potential to be just as advantageous. Cartoon or stylized graphics makes your game more noticeable in categories that realism is overused. This technique can appear in World War Polygon.

The Freedom of Game Genres and Technologies

The amount of investment and breakthroughs that gravitate around realism improvements concerning graphics in video games is noticeable. Many software and hardware constantly evolve to better integrate realistic objects and textures in a game, for mobile or PC. As a result, games with realistic graphics will require a particular technology, which probably is something up-to-date. If somehow you’re using dated technology to achieve realism, you won’t harvest the ideal results. Consequentially, now you’re under the dependence of new technologies, which will even affect future updates for the game. Stylized graphics won’t necessarily need updated technologies; they are more uncomplicated to provide ideal results on most software and hardware. By using stylized graphics, you won’t necessarily depend on new technologies.

Realism-centered graphics tend to lock the artists into following real-life rules of lights and colors. But, of course, this can deliver outstanding results when mastered perfectly. Still, mobile devices might struggle a bit to reproduce this. However, stylized graphics open the door for taking advantage of nice lighting mixed up with artistic flavor. Therefore, this enables artists to enhance and control the lighting as they see fit, without carrying the burden of it straying away from realism.

For instance, making an in-game’s atmosphere look like it’s under “filters” is highly acceptable in games with stylized graphics. Pixelized games often feature exciting lighting techniques, as seen on the PC title Kynseed:

And in The Unliving - a rogue-lite pixel art action RPG currently in development by RocketBrush Studio:

Although this isn’t an absolute rule, the general case is: sculpting stylized is usually quicker. A stylized asset tends to have fewer surface information and more prominent shapes, making it typically quicker to produce and assemble textures. For instance, the skin from an orange is highly porous, wrinkly, and organic, making it a bit arduous to recreate and sculpt. On the other hand, with stylized graphics, pores tend to be bigger, wrinkles more straightforward, and organic features not-so-minimalistic. However, it’s essential to define if the stylized graphic you’ll use will aim for an exaggerated tone or a more minimalistic one. When stylized assets tend to follow an exaggerated path, they’ll likely be easier to sculpt and texturize since they’ll present more prominent and straightforward shapes.

A realistic game art style is considered more complicated as it requires a highly skilled hand and quite a precise adherence to human proportions. Whereas on the other hand, stylized art grants more freedom proportion-wise and is usually learned by the artist first before they move to a realistic art style. Therefore, stylized art style has become quite popular choice in mobile casual games with an inclination to casual, light and playful atmosphere.