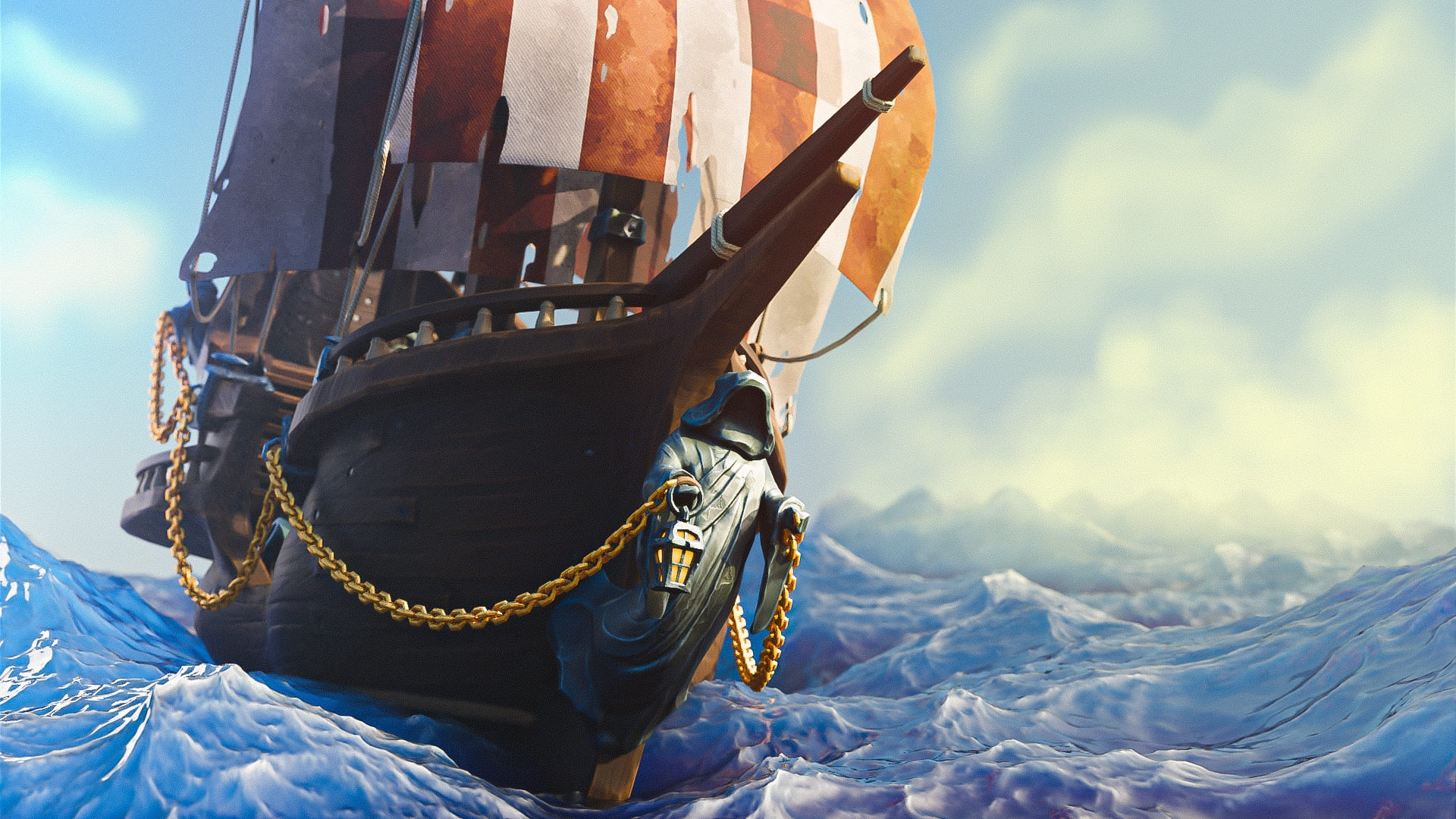 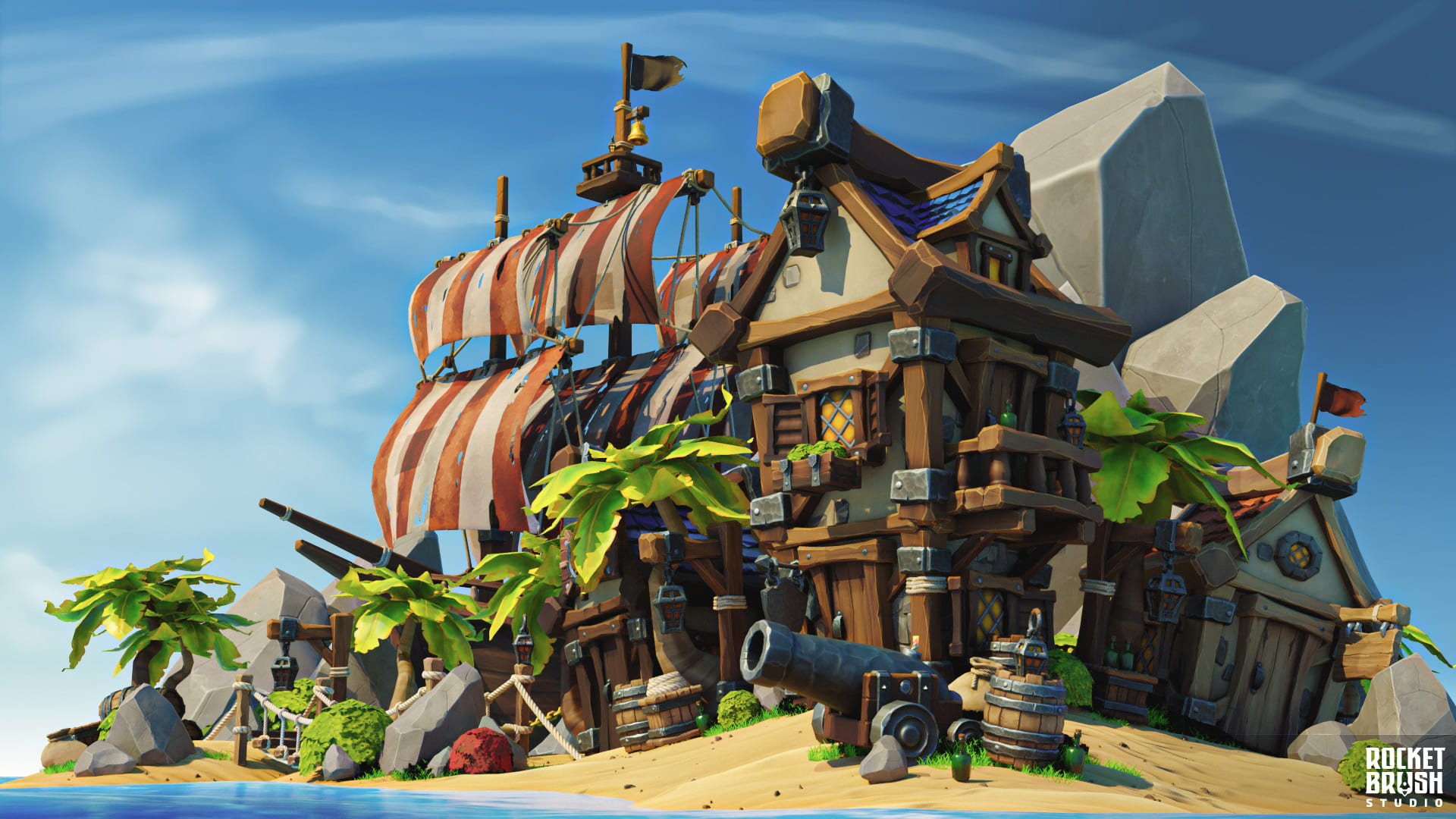 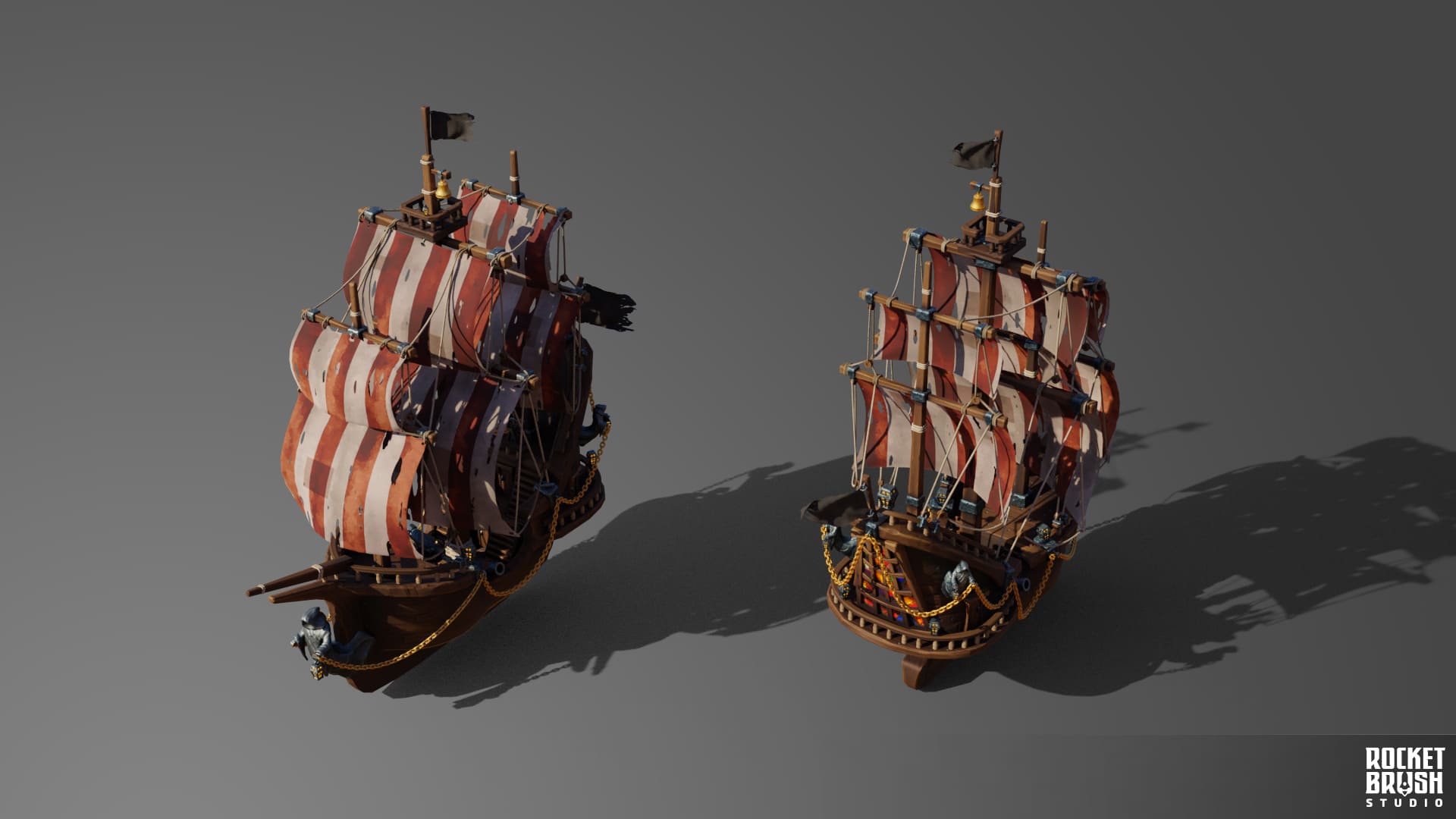 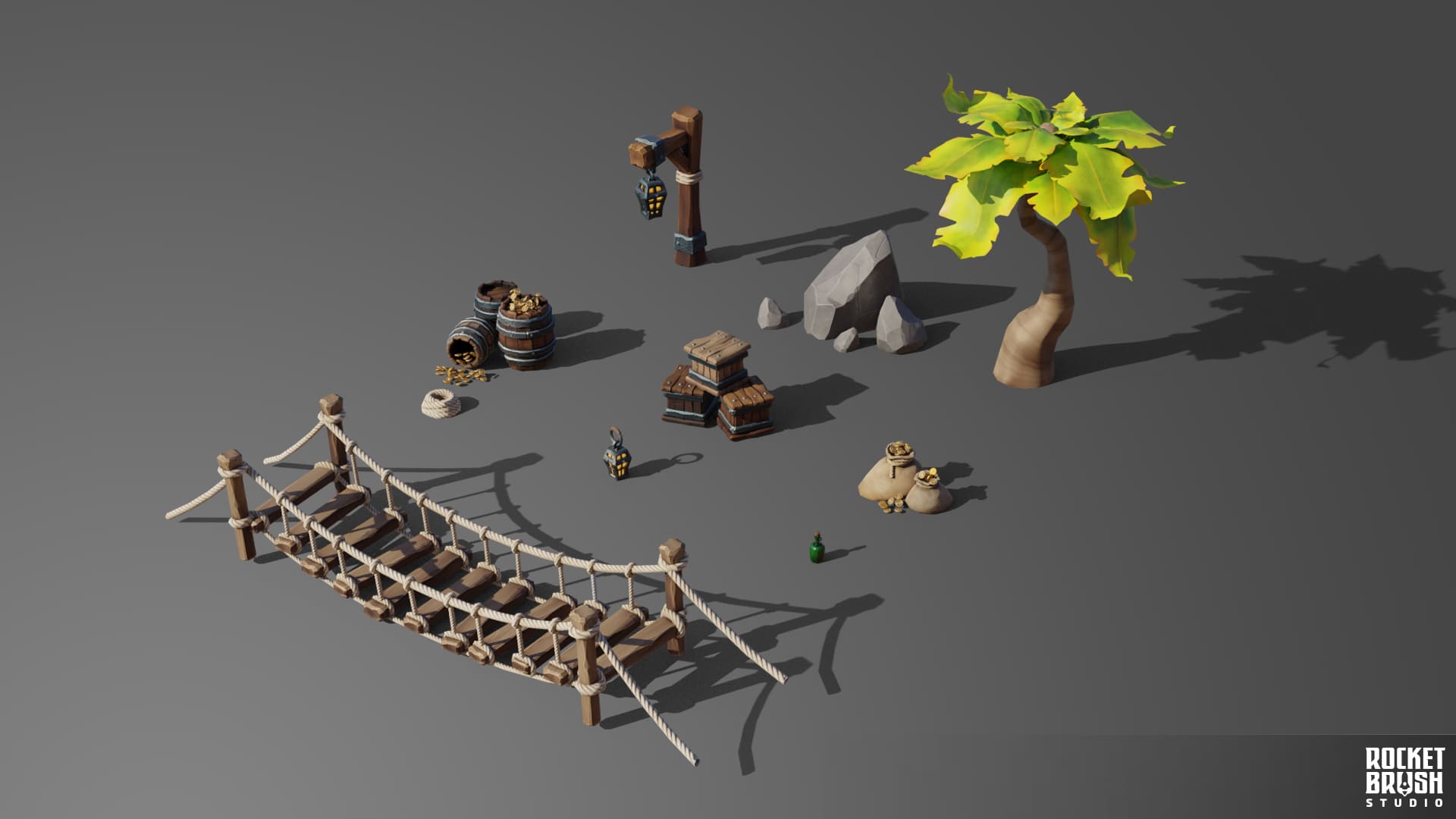 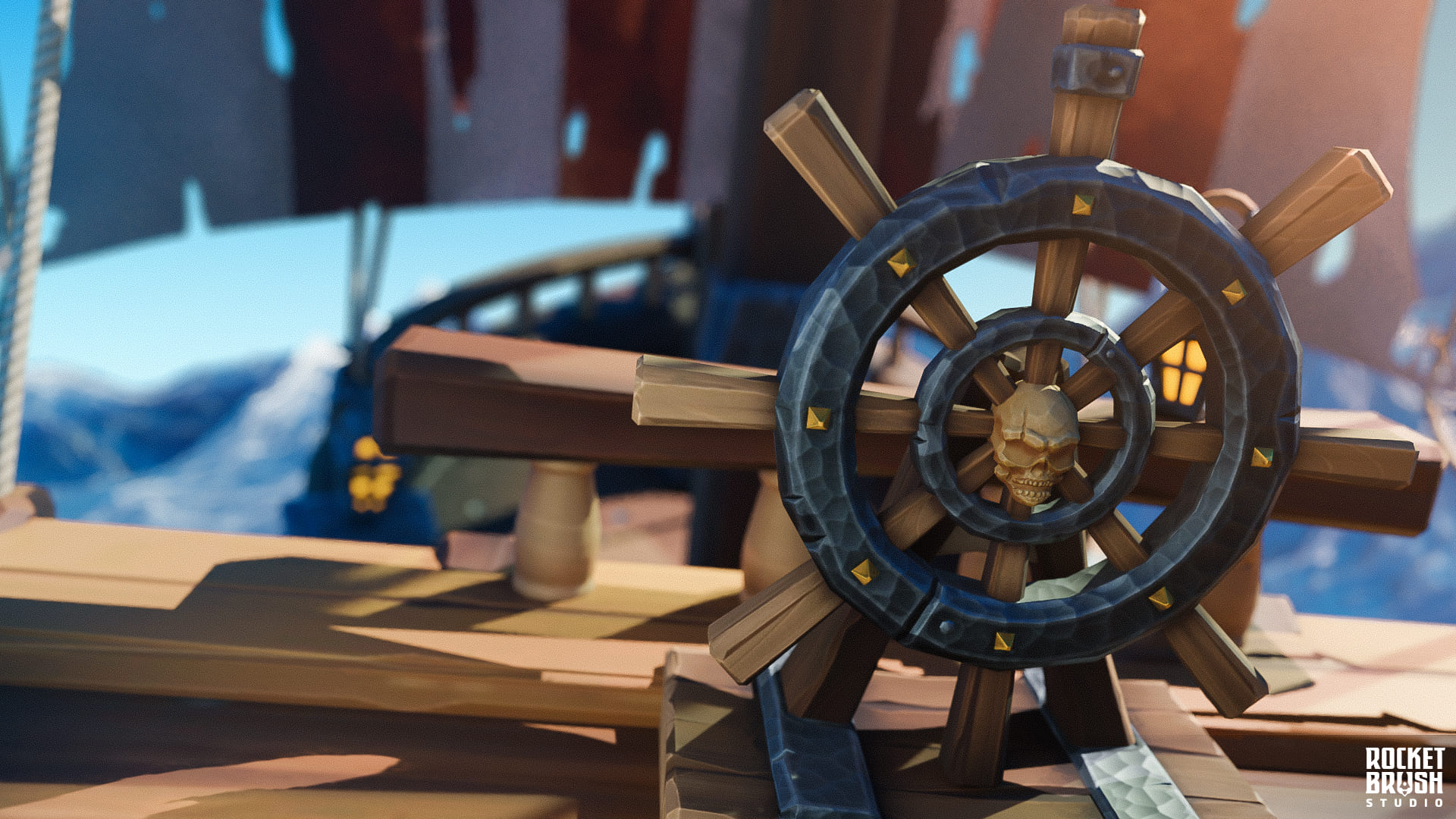 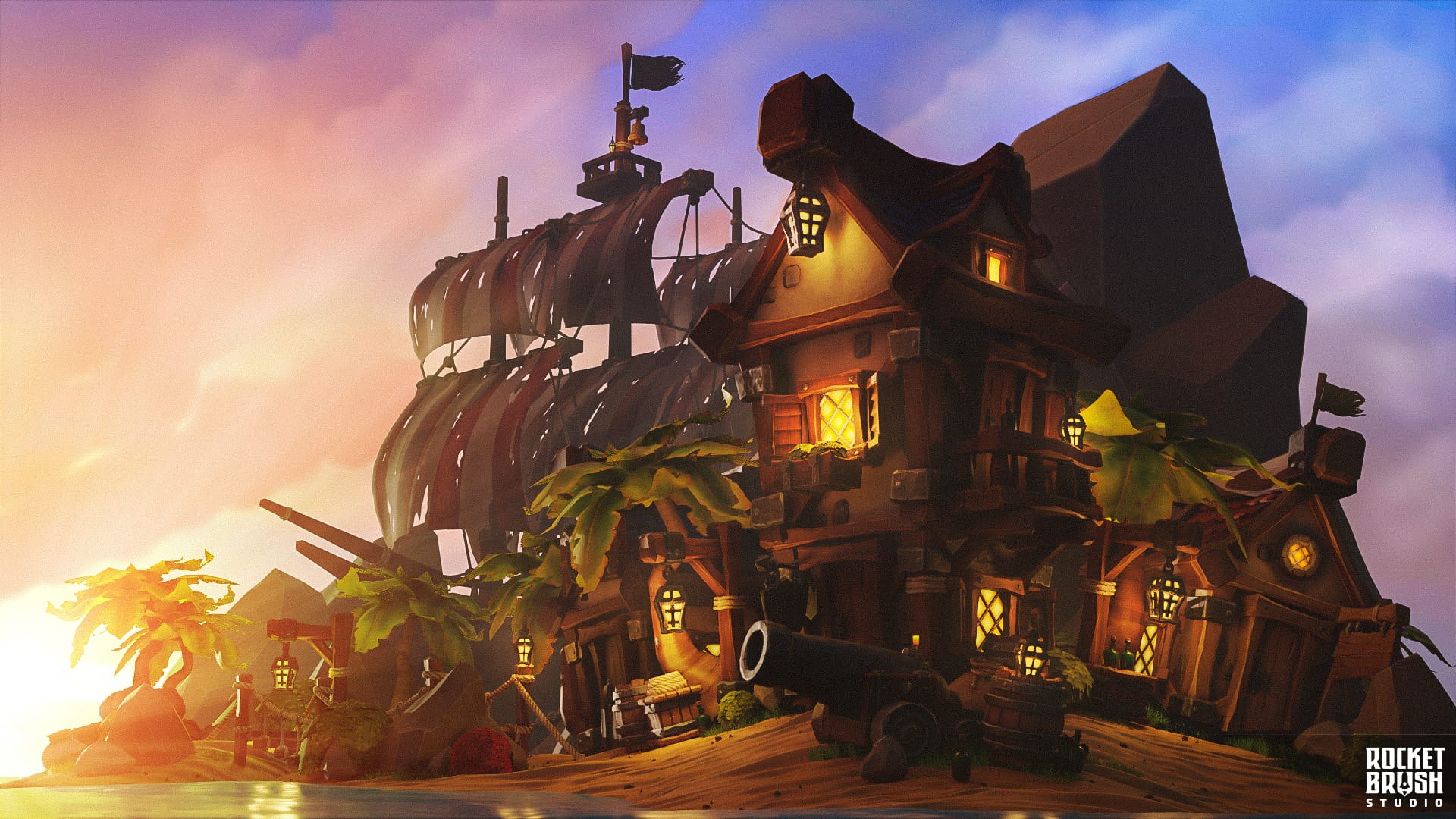 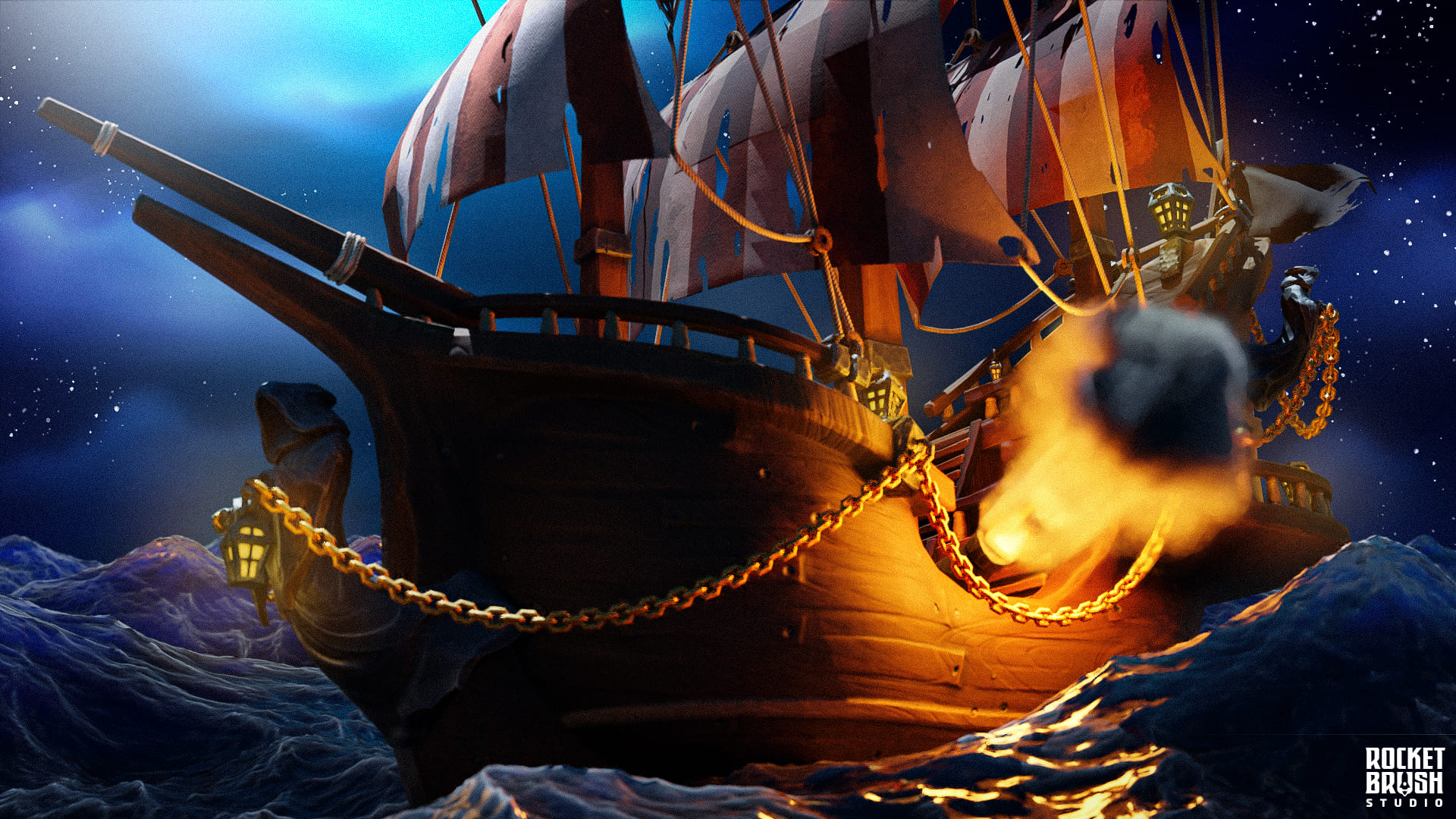 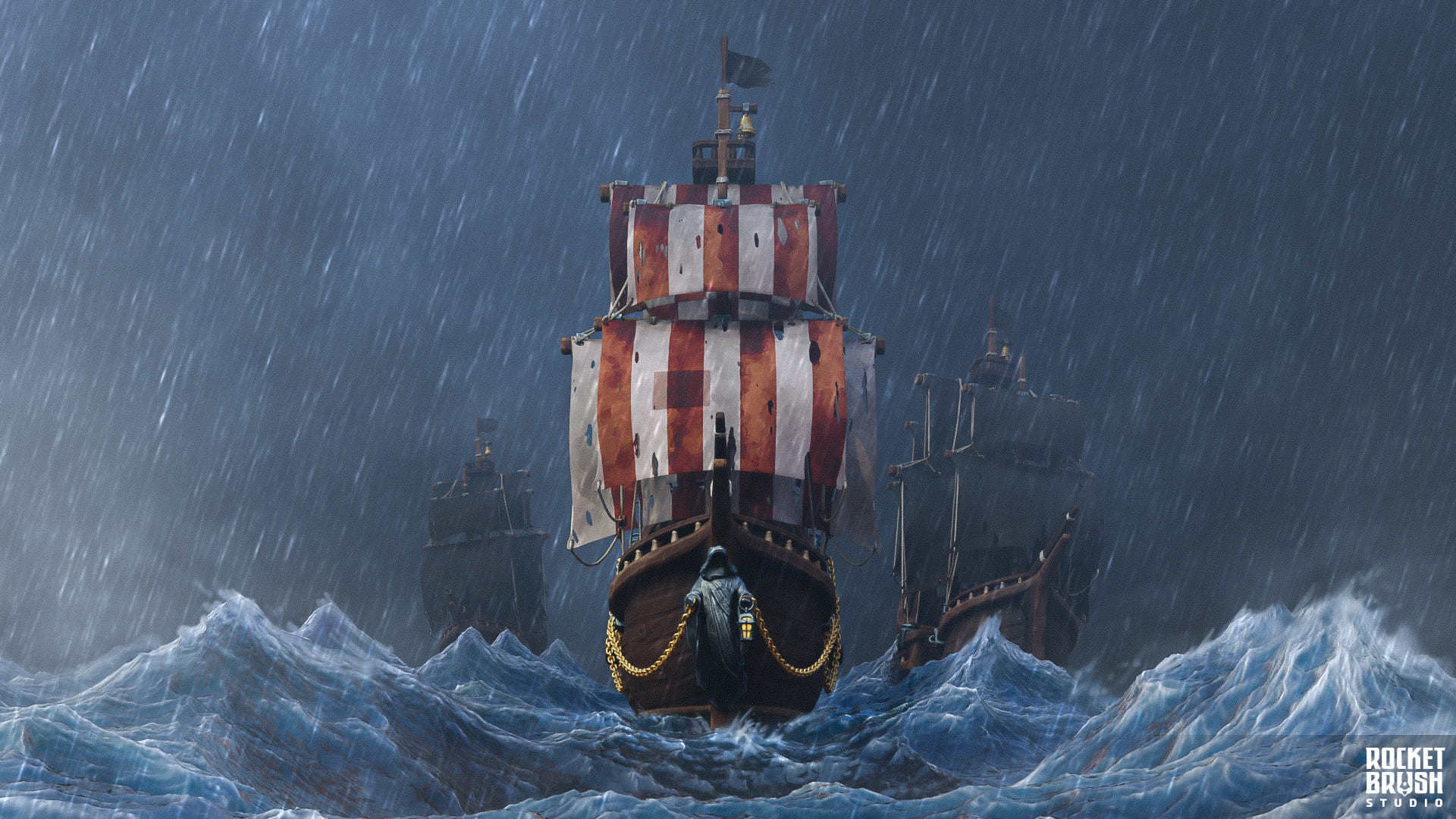 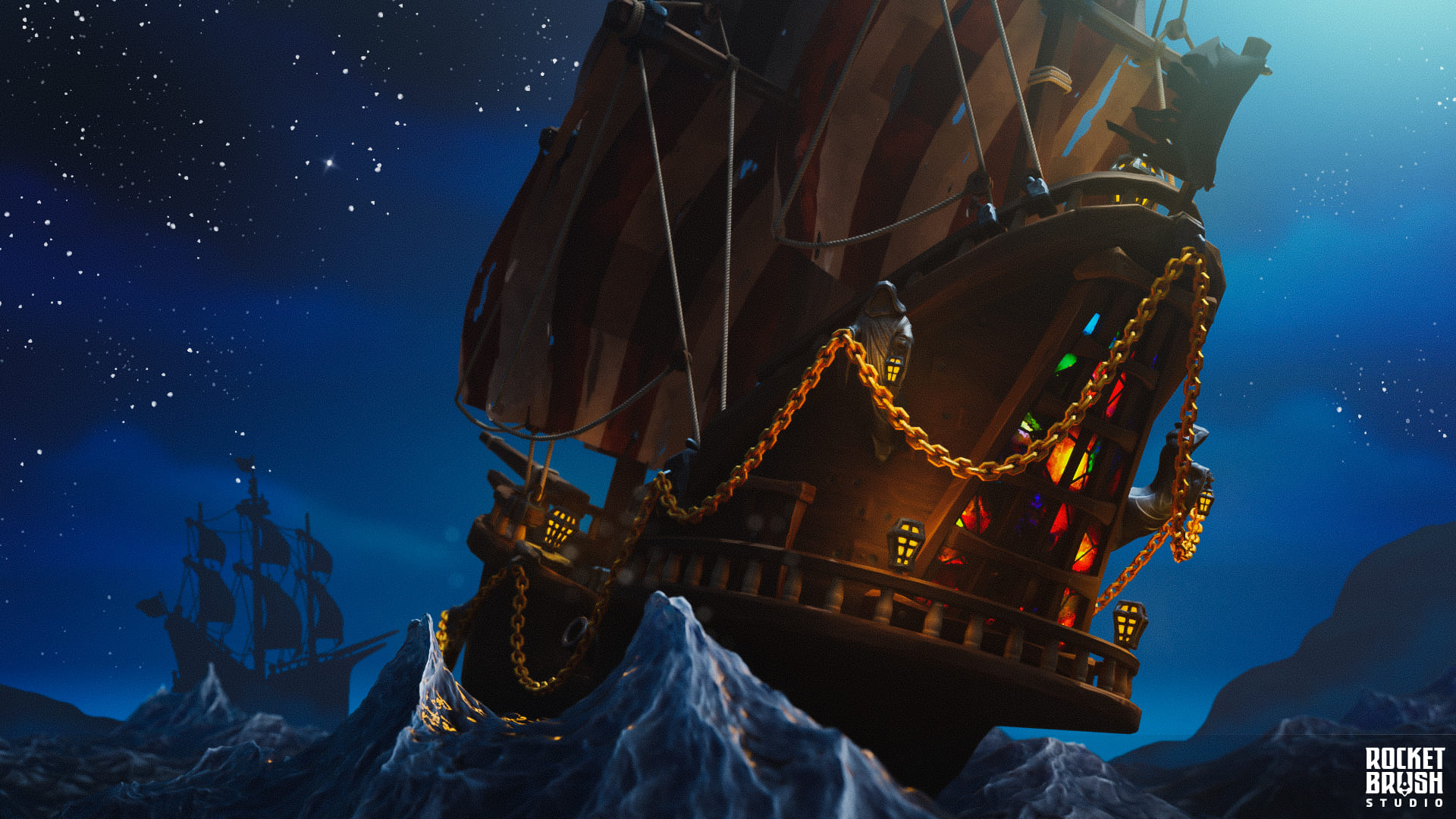 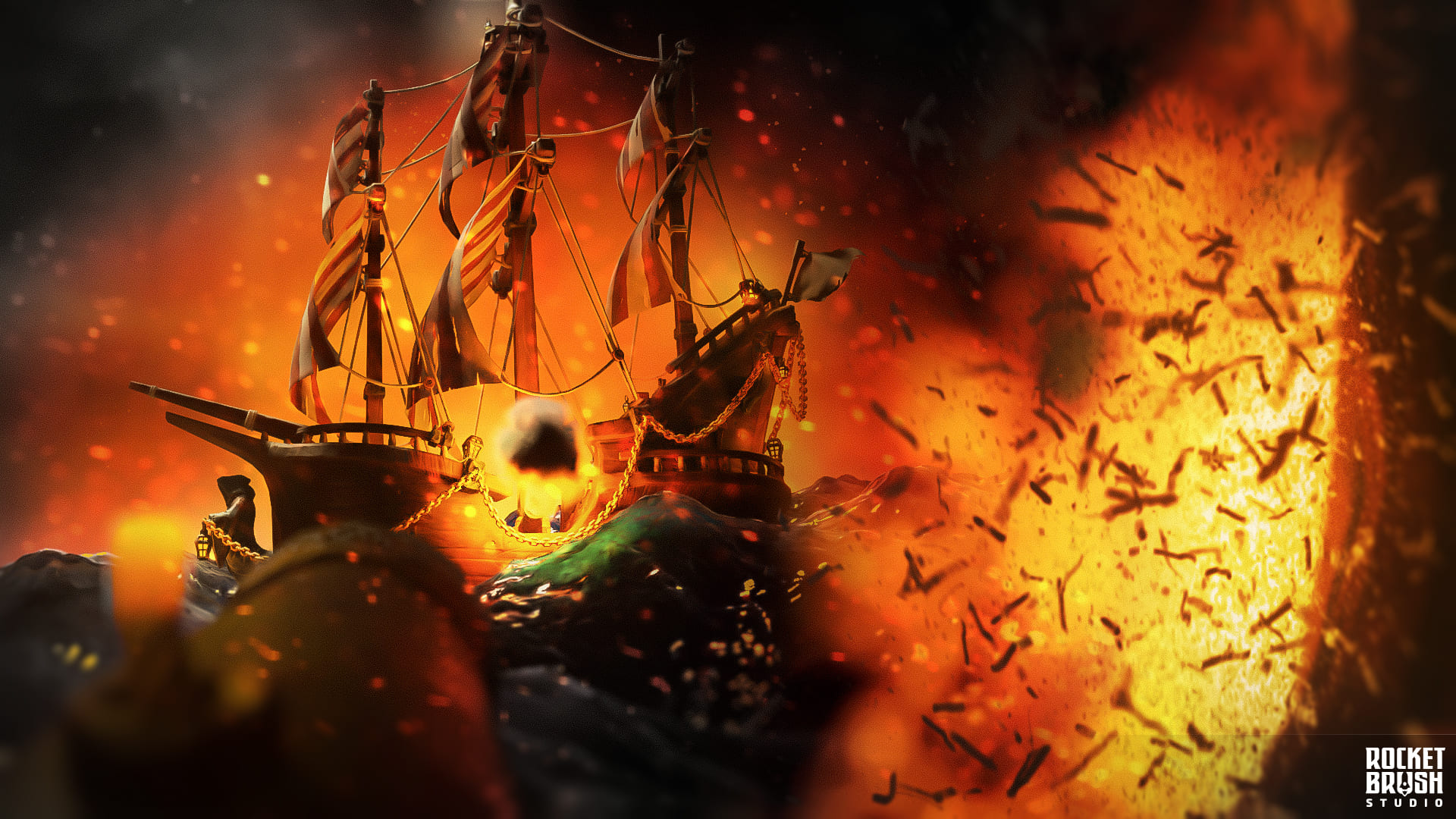 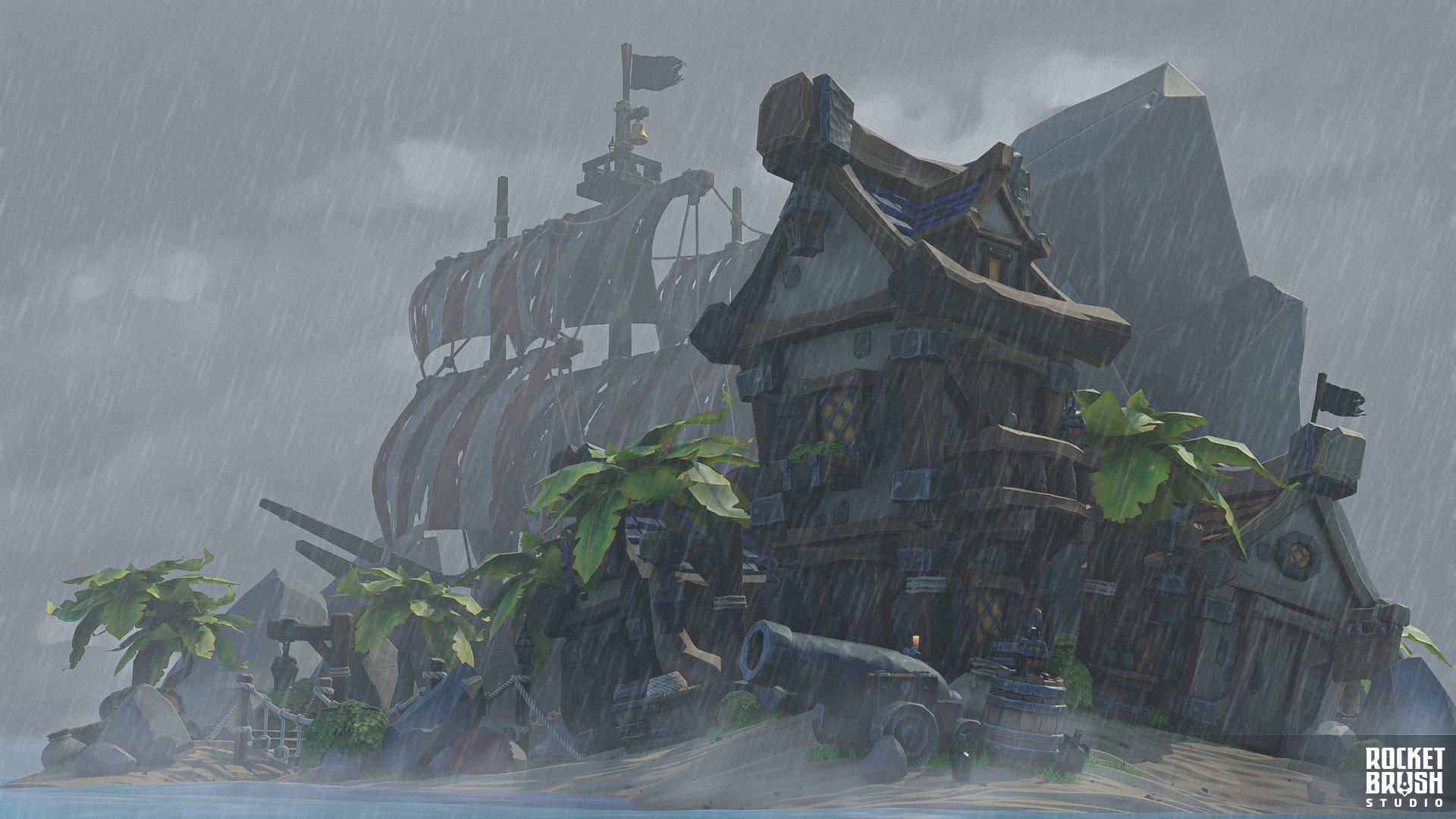 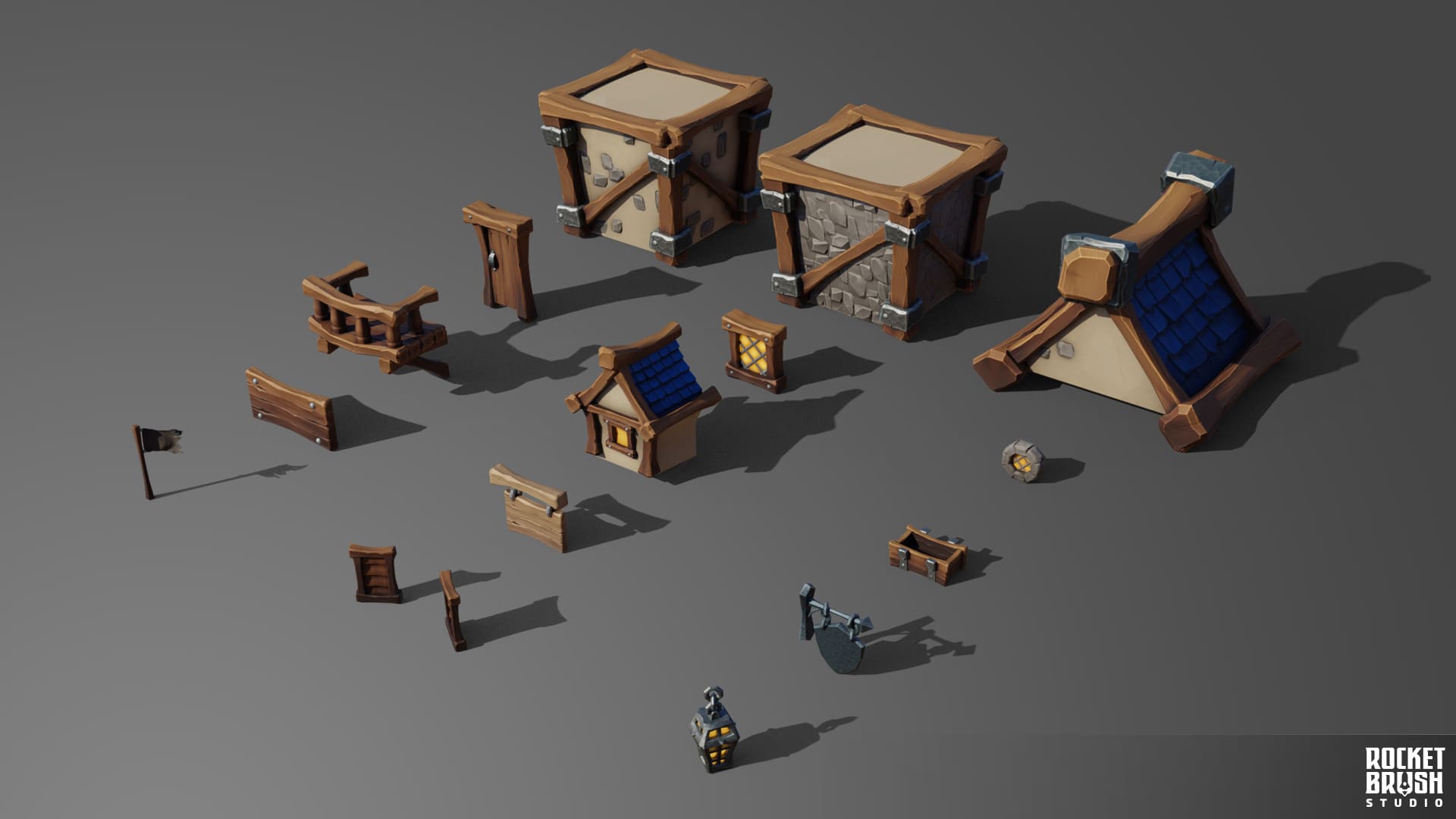 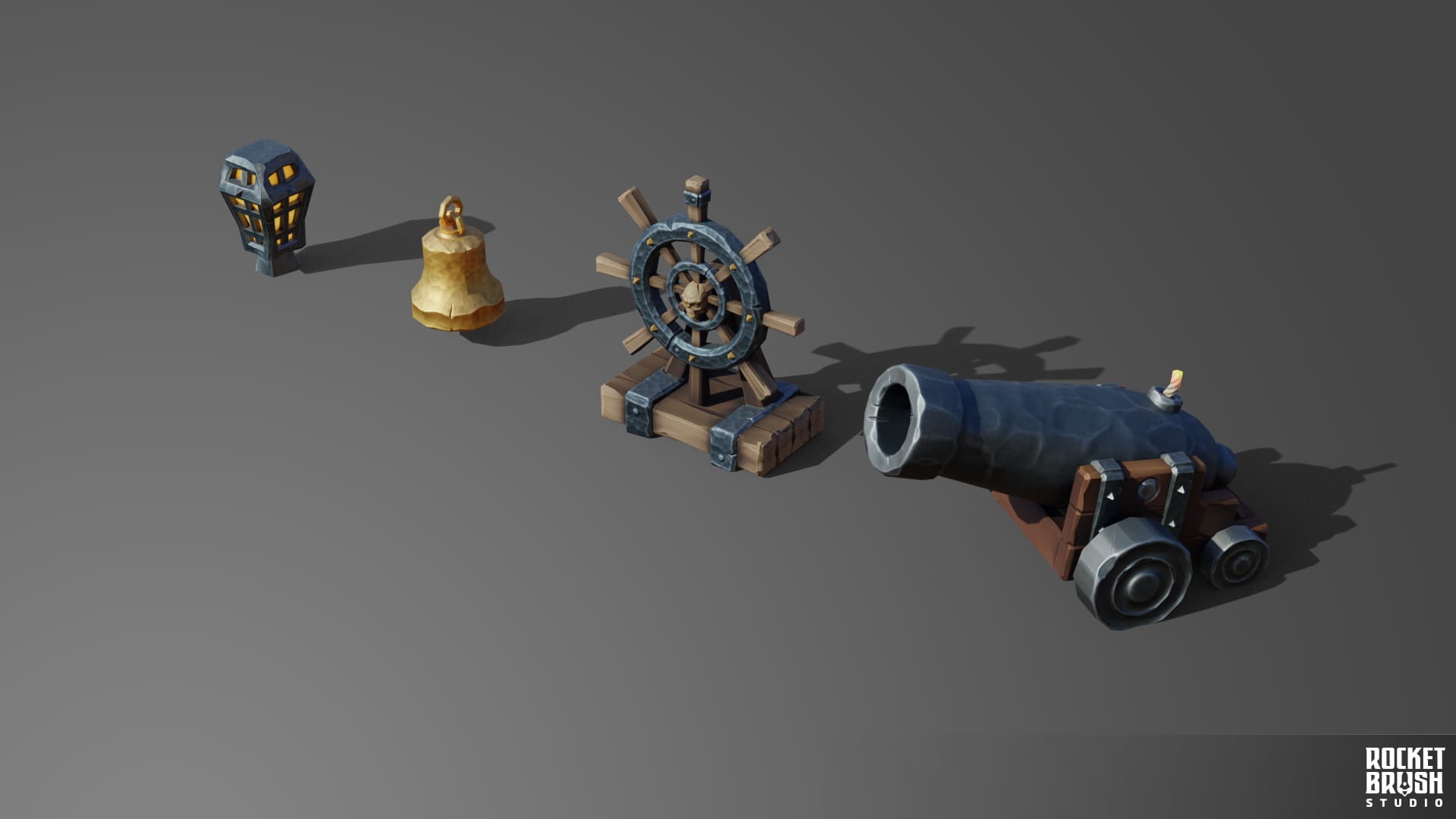 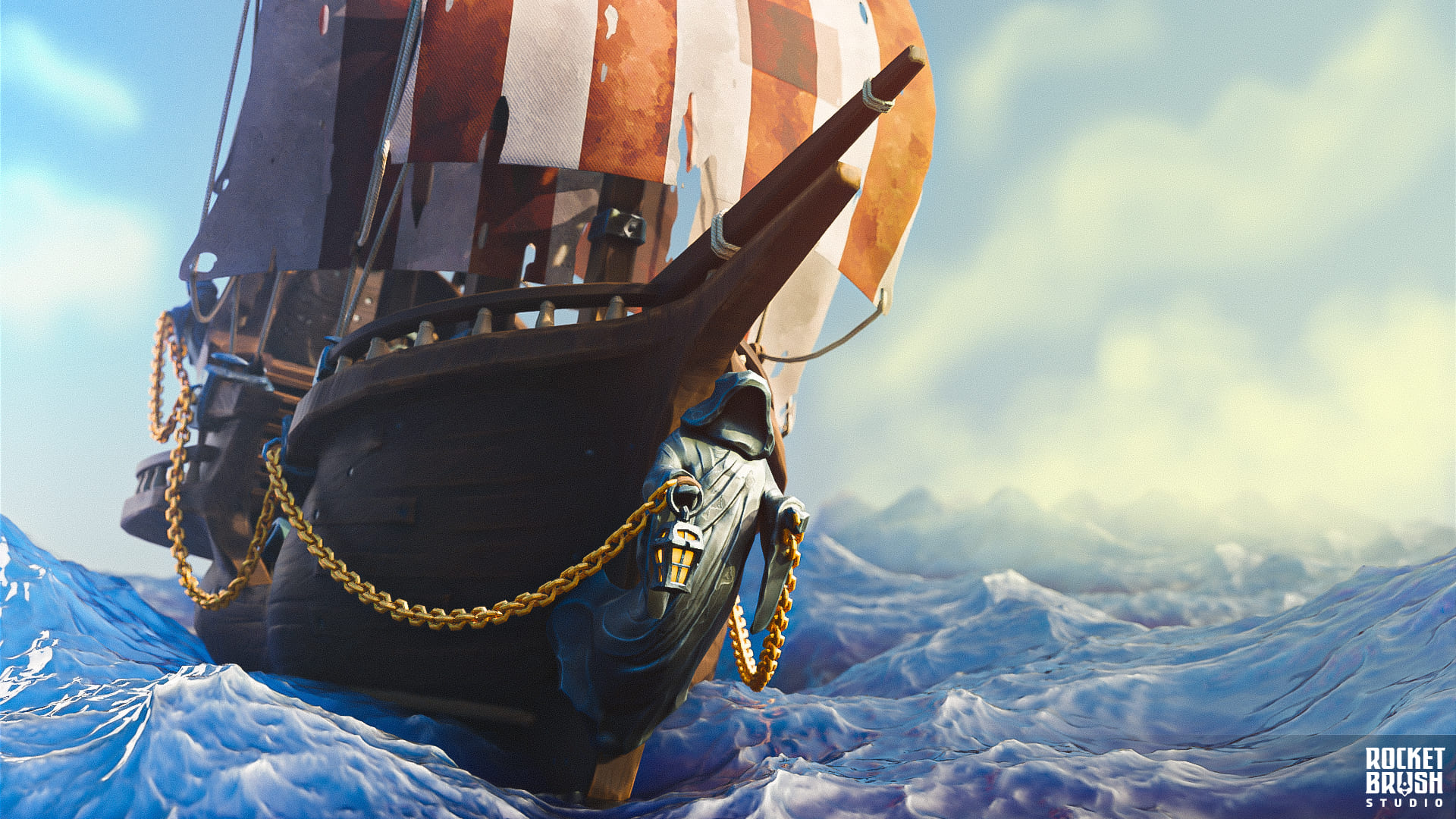 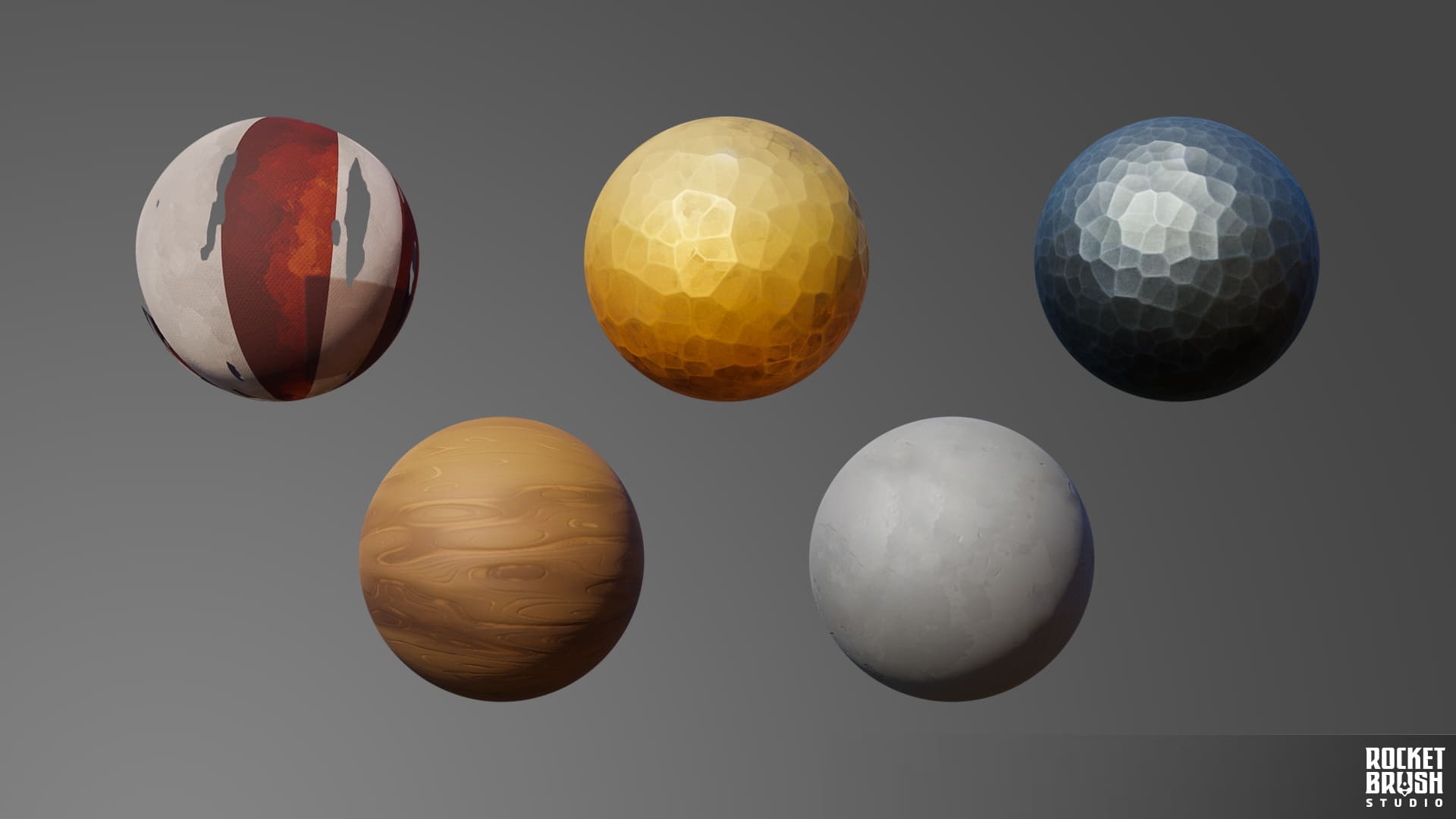 The 3D art pipeline that we used working on this project consisted of blockout, high-poly sculpt, retopology, texturing, assembling the scene, and a final polishing pass to make our 3D assets look better.

First, we create a rough object to test the overall idea and view of a scene or a 3D asset. At this stage, it has quite simplistic geometry and rough shapes – thus, the blockout. This is a crucial initial stage of creating a 3D model that helps to get an overall view of the scene/asset, establish its size and proportions. There’s no need to be very precise at this stage. You might use some very simple lighting to get the idea of how it’s all going to work together, but it’s up to you. Here we see if our 3D asset is good to go to the next stage of the pipeline which is Sculpting.

Sculpting is the next essential part of our 3D pipeline. Basically at this stage, we utilized ZBrush to transform and manipulate the various parts of our blockout asset as if it were made of clay. The final goal of this process is to replicate the 3D asset with the needed level of the resemblance of its real-life analog – of course, if there’s one, to begin with. Working with the stylized or even sci-fi-themed assets, we refer to the concept art to cross-check the forms and details of the final sculpture. While working on this specific project we used no sculpting at all, except for the ship and the cannon you can see above. Our 3D studio can still provide a full sculpt for environment objects and props if needed.

Now when we get a high-poly sculpt, it’s high time to move on to retopology, or sometimes just “retopo” to turn it into 3D low poly. It is a process of optimization of an initial high-poly model polygon-wise. In other words, we can’t use a model of, let’s say, a gun or a treasure chest, worth a million polygons in the game – if there are dozens of high-poly 3D assets like those, it will overload the CPU and the game simply won’t be playable on most of the devices. Therefore, a high-poly 3D assets need to go through the retopology – a simplification and optimization of our initial high-poly mesh which is gradually overhauled into an object with a much lower polycount, making it lighter and easier to be calculated by the hardware.

Overall, by using retopology at this stage of the pipeline, our 3D studio gets an optimized and light model while keeping all the shapes and details suitable to use in-game. But before well move to the last step - texturing, we need to perform one more necessary process called UV unwrapping - a process in which the 3D model is decomposed into a 2D space. Since all textures are essentially 2D images, the process of UV unwrapping is necessary for the software to understand where exactly and how to apply the texture. The simplest reverse example is origami, where we get a 3D shape from a regular sheet of paper.

After the retopology and UV-unwrapping is done, and we get an optimized 3D asset, we can move forward to the last step - adding some colors and textures to the surface of the 3D low poly asset that is already optimized by this stage. This process is essentially texturing. There are several software packages for texturing, but we have been using Marmoset Toolbag for map baking and Substance Painter for making textures. This is also the stage where we bake the lighting to the texture if the project brief requires this specific 3D asset to have baked lighting in the first place.

Assembling our 3D scene in Blender

Once all the 3D assets were ready, to see the result as soon as possible, we used ready-made models in Blender, assembled them all into the final composition and rendered the scene to get several high-resolution 2D previews. This resulted in a way more engaging atmosphere that you can see on the images above. At the same time, all the models made by our 3D studio are already well-optimized and can be used in the game engines, such as Unreal Engine and Unity by the developers right away.

A final polishing pass in Photoshop

Once the 2D images were exported, we used Photoshop to make a final polishing pass and add a little more shading to our scene. There quality level of 3D low poly assets these days is quite high even in relatively simple mobile games, therefore, we can't let it go without polishing the final image a little more to get an outstanding visuals as the result. As you can see, that the quality is an essential cornerstone that our 3D studio adheres to at all stages of 3D asset production.

‍- Key answers to the game art outsourcing questions in 2022

- Maya vs Blender: Pros and Cons for a 3D game artist