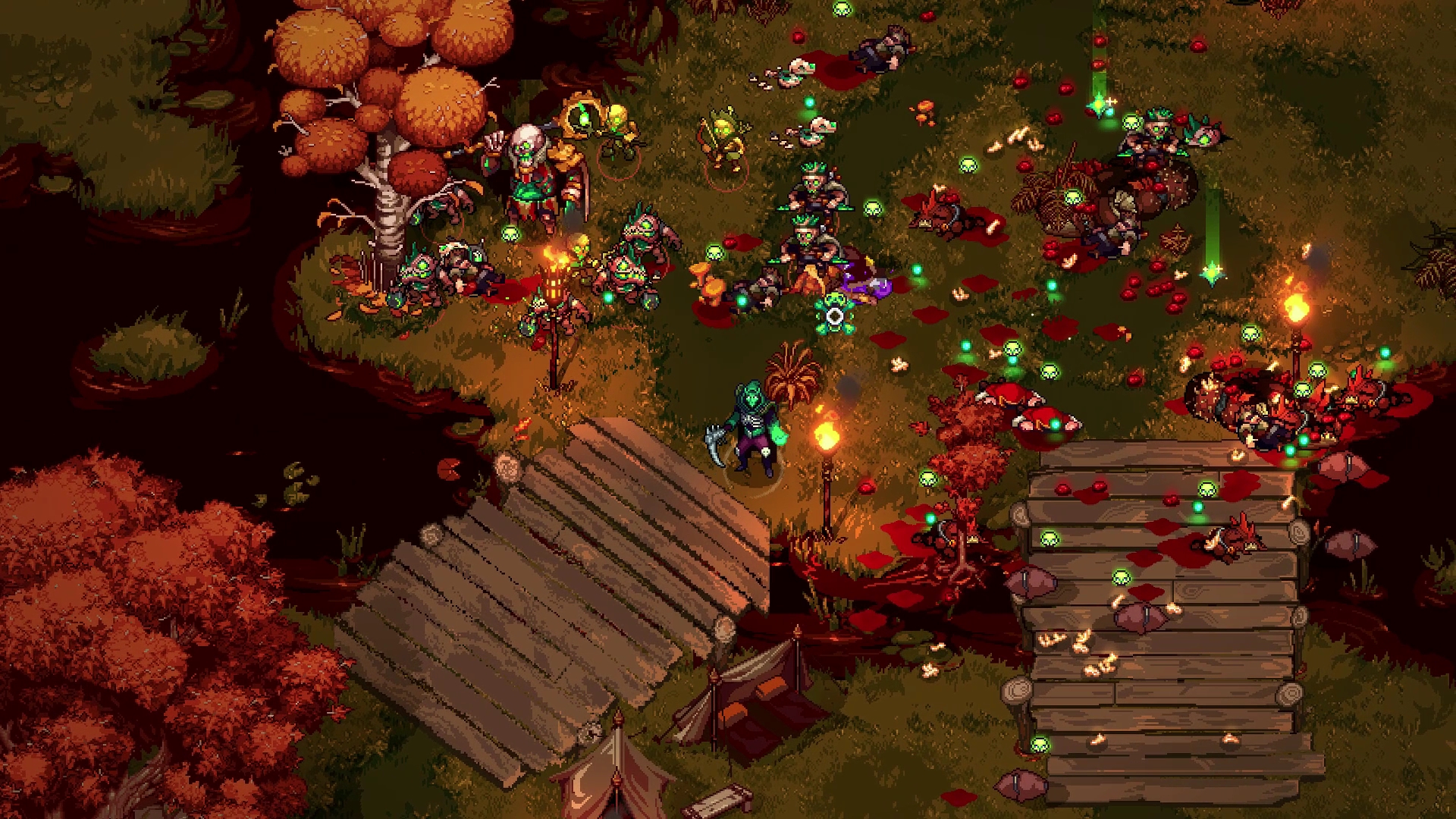 In the beginning, the Pixel Art aesthetic wasn't really an artistic choice but a necessity: hardware limitations in the '70s, '80s, and '90s made it prevalent in most games. But with the rise of 3D games in the '90s, Pixel Art became less and less used. But then why is Pixel Art so popular nowadays? The most obvious reason is nostalgia. Because most early games were made in this style, there's a strong connection between Pixel Art and the vibe of an old-school gaming. For those growing up in the late 80th and the beginning of 90th, Pixel Art fuels memories of Friday evenings and Saturday mornings of Metroid, Super Mario Bros., and The Legend of Zelda marathons.

Since memories of playing games are (mostly) positive, we feel a warm nostalgia the moment the pixels are big enough. After its interim decline in the 90s, some developers still used this aesthetic during the 2000s. It seems like that was long enough to trigger the nostalgia factor in our brains: a few Pixel Art games, like Cave Story, became an unexpected success and started a Pixel Art Renaissance.

But emulating the past wasn't the only reason that motivated these developers - cheaper costs were an equally important motivation, if not the main one. Compared to realistic-looking games, Pixel Art visuals are more efficient to produce, meaning reduced production costs. It's not a coincidence that most Pixel Art games since the 2000s were (and are) made by indie developers. Because of this, Pixel Art has become a synonym for indie games. Pair the lower production costs with the nostalgia factor and it's no surprise that Pixel Art became popular again. But that's just a part (a pixel, you may say) of the full picture.

Most modern Pixel Art games aren't just replicating the technical limitations of the past. Instead, they take the pixelated flavor and enhance it with larger screen resolutions. By dropping the old 4:3 format of old games and adopting the 16:9 widescreen format, they can achieve more visual complexity without sacrificing the retro flavor. This is what Jo-Remi Madsen (Owlboy) defined as Hi-Bit.

Some games also break the pixel limitations and add non-pixel visual effects or UIs on top of the traditional aesthetic to add a refreshing touch. And others go as far as to blend 3D graphics with Pixel Art textures to create a hybrid of both.

Is Pixel Art an artistic choice on its own?

As fewer and fewer players have lived in the early era of video games, nostalgia will become less effective over time. But that doesn't mean that Pixel Art will fade away. As years pass by, Pixel Art seems to be consolidating itself as an artistic choice in its own right rather than just a nostalgic trip. This is not an unseen phenomenon: take Synthwave, a musical style that was born from nostalgia from the '80s but has stayed and evolved further as a genre in its own right. Yet how does Pixel Art stand on its own without the nostalgia?

Compared to highly realistic games, Pixel Art games require the players to "fill the gaps". A character's face may be just a handful of pixels, but the player can understand its meaning with just that little amount of information. The player has to use her imagination to make sense of it with the little information provided, in contrast to realistic games where the information is already "chewed". Far from being a negative effect, this additional effort is enjoyable - it's like the difference between an anime and its real-life action adaptation. Or, taking it further, between reading a book and watching a movie.

When we fill these gaps, each one of us fills them in the way that makes the most sense for our brain. Because of this, it's not uncommon that the magic aura of a non-realistic-looking character gets lost as we add more and more details in an attempt to make it look more realistic. Pixel Art is not the only aesthetic that plays with this. For example, think about Impressionism. Compared to other painting trends of the time, this late 19th-century style of painting requires an active effort from the viewer to interpret its blurred look. And there's where the magic happens. Interestingly, in the beginning, Impressionism was also used because it was a more efficient way of painting, like in Pixel Art.

This makes the Pixel Art aesthetic a whole different perceptive experience compared to realistic-looking games. And I believe that the more games achieve hyper-realistic visuals, the more refreshing and valuable will Pixel Art become.

‍An aesthetic of a sound

But the Pixel Art aesthetic is not only about visuals. While many realistic-looking games (especially AAA) borrow the Hollywood approach of using orchestral scores, Pixel Art games have their own sound: 8-bit and 16-bit music, also called chiptunes.

Both are shaped by the same minimalist philosophy. In a similar way that Pixel Art visual magic comes from the technical limitations of the early games, so does 8-bit and later 16-bit music. While early games had to rely on only a handful of pixels to create a fictional world, early video game soundtracks - especially 8-bit soundtracks - had to be created with extremely simple synthesized sounds which result in what we know as the characteristic "blip blop" chiptunes sounds.

These limitations not only shaped the sound, but also the way composers made music. Only a few layers of sound could play at the same time, forcing composers of the time to adopt certain ways of composing. The most prominent was a preference for catchy melodies, which led to most of the iconic video game melodies we all have ingrained deep in our gamer brains. Compare the simple but memorable soundtracks of the first Mario and Zelda games with the rather atmospheric music of (most) modern AAA games. Generally speaking, the further a game moves from Pixel Art graphics and dives into the realm of realism, the less melodic and more atmospheric its soundtrack tends to be.

And we associate chiptunes with Pixel Art simply because, in the beginning, they always went hand in hand. For many years, Pixel Art games meant an 8-bit and later 16-bit soundtrack, and there was no other possible way things could be. However, as technologies evolved, and at the same time that Pixel Art evolved from being a necessity to being a choice, so did its sound.

Some modern Pixel Art games have strayed away from the old sound path and use other types of sounds instead, while others keep using purely chiptunes music. Interestingly, somewhere in-between these two there's a rising trend of Hybrid 8-bit/16-bit soundtracks, seen in games like Celeste or Ikenfell. These hybrids combine the old-school chiptune sound with realistic/modern sounds to create fresh-sounding music that still preserves the retro connotations that connect so well with the Pixel Art visuals. In a way, it's similar to Pixel Art games using modern visual effects on top of the pixel visuals to expand its vocabulary.

The effectiveness of game music is proportional to how well it fits the game. And chiptunes have such strong ties with Pixel Art that they very easily fit with each other. When we see and hear them together, the music reinforces the retro connotations of the Pixel Art graphics, and at the same time, the pixel visuals reinforce the unique old-school feel of chip music.

Pixel Art strongly influences the gameplay of the game. When done properly, the simpler visuals of Pixel Art make it easier for the player to recognize different game elements and can allow a smoother game experience. On the other hand, this simplicity makes it hard to fit many different game elements, so striking the right balance when it comes to the density of elements is key.

And the simplistic approach of Pixel Art doesn't mean it's easy to achieve. There's certainly a challenge in making characters, UIs, and fictional worlds look pleasant and distinguishable while keeping the pixelated look. Reaching the sweet spot that allows the player to interpret what he's seeing while not giving it all away can be a real challenge. Lastly, Pixel Art games age better. While games trying to look "new" look old after a few years, the retro aesthetic holds up better because it's not trying to look new - the opposite.

Perspectives for 2022 and onwards

Pixel Art gaming keeps booming up. Born from hardware limitations, it started as a necessity. Then it grew up to be an artistic choice, as well as a way for developers to make their games have a unique looks and atmosphere. As it keeps growing, artists and musicians keep pushing the boundaries of what it can do, keeping the aesthetic fresh and attractive regardless of how much nostalgia it carries with it. We can't predict how Pixel Art will evolve (can anyone?), but we are sure that it won't decline anytime soon.