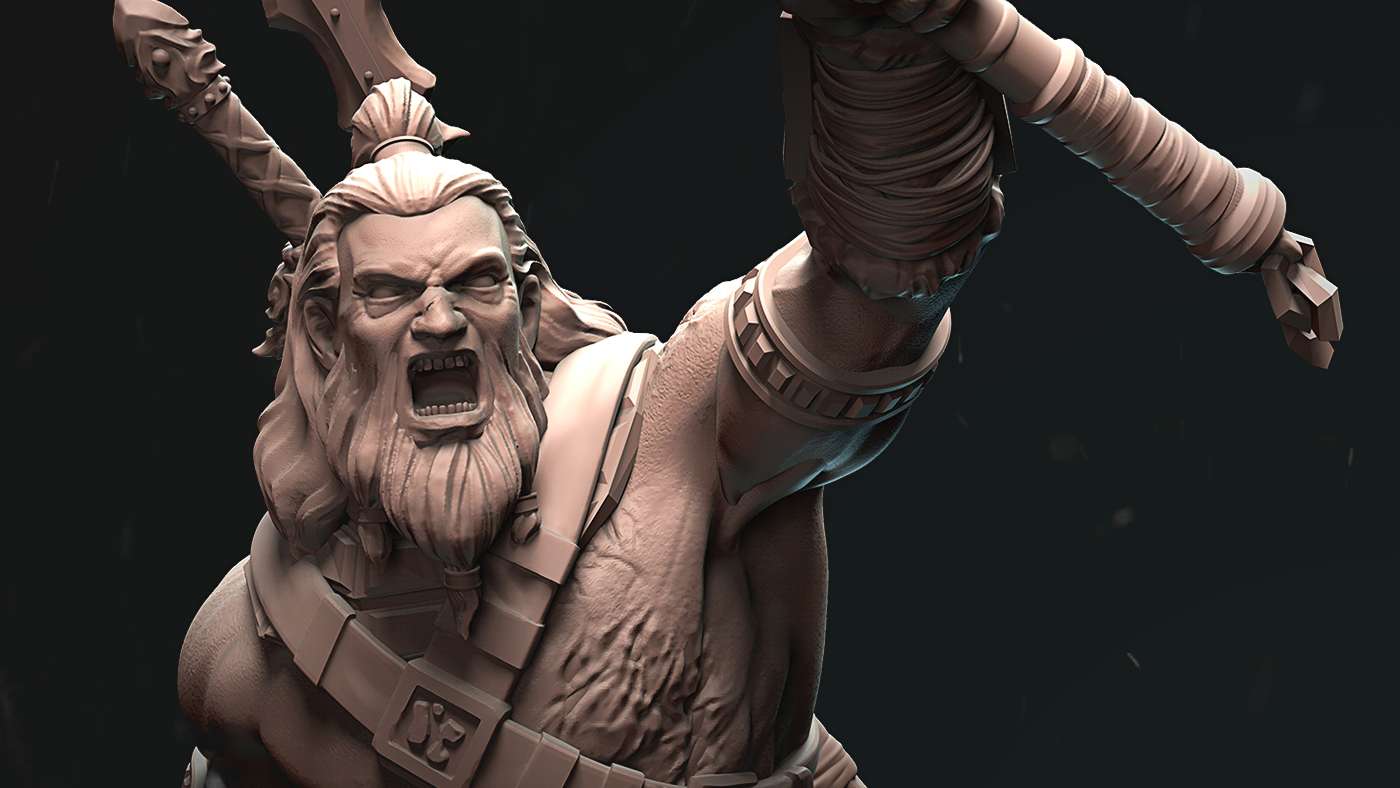 The pipeline of creating 3D character might differ from one studio to another, but the core stages of the 3D character modeling workflow are the same. Below we will discuss the basic approach and key stages of modeling 3D game characters.

Without a proper concept, the 3D artist won’t be able to re-create the character as precisely as it has been envisioned by the game designer or a partner studio whose project we work on. At this stage, it’s better to show the character from at least 3 angles (front, back, side), make all the materials and accessories distinctive and easily recognizable. Sometimes the concept artists create such a high-quality concept it can be directly pulled on the model - but that’s something used for the props, rather than for the character art.

At this point, the concept should be re-created as a 3D character model. There are various tools for sculpting like ZBrush, Autodesk 3ds Max, Maya and Blender. However, Zbrush is considered to be the first choice for sculpting work.

In sculpting, the artist blocks out the character’s general silhouette. Blocking out, sometimes also called blocking in, refers to the use of cubes, cylinders, planes, spheres, and other primitive geometric shapes to show the scale of a game environment or the 3D character and plan how it’ll move through it. Using different brushes, the artist then sculpts the basic forms, hard surfaces, and more detailed forms like wrinkles, creases, and muscles. In topology, the artist creates a way to define the shapes that’ll make up the mesh. The artist can expect to do a retopology later where they’ll clean up the mesh for easier animating.

This is the process of adjusting the surface of the model to lower the number of polygons. As most of the games rely on players’ hardware to work properly, it’s crucial to have all 3D game assets well optimized so that the system requirements will be acceptable for a smooth gaming experience. Blender can offer quite useful solutions such as SpeedRetopo, Retopoflow 3, Softwrap, and Instant Meshes. Maya, on the other hand, offers quite powerful tools for retopology that can be equally efficient and sometimes automated. Ultimately, it all depends on your preferences and the goal - for the complex sculpts it comes down to working manually with all its planes and edges.

You can think of a UV map as an unwrapped, flattened 2D skin of the 3D mesh. UV mapping is used to add texture and adjust the composition of a scene and its lighting. Often at this stage, the artist will do further retopology and bake the high poly details into a low poly model. Baking here refers to preprocessing data at build time or compiling for use in the game. The data is preprocessed because it would be unrealistic, time-consuming, and expensive to do it in real-time in the actual game. Baking is often used to pre-compute lighting and texture information.

The texture artist received a 3D model with a shaded, flat color. They create and apply textures, combining skin or fabric scans with hand-painted textures, including color, reflection, displacement, reflection, grime, damage, illumination, and other map layers. Not all 3D models require textures, but sometimes they do. Texturing in fact can become a whole standalone process, especially if the hand-painted textures are involved. There is a specialty within the game art - texturing artist that focuses solely on creating textures and materials. Some of the most popular tools for work with textures are Substance Painter, Substance Designer, and 3D Coat.

Also known as skeleton animation, rigging refers to the process of adding control to a 3D character model. It defines the range of gestures and actions of your 3D model character. Any object can be rigged, not just human models. The artist adds bones, sockets, and connections according to the game’s guidelines. Rigging simplifies the character animation process and, by extension, enhances production efficiency.

This is another time-consuming part when you create 3D characters. Here, game developers complete all the animations in the animation tree, including walking, falling, running, stooping, throwing, dying, shooting, taking damage, talking, etc. The animator uses the bones added during rigging to move the model, rotate, and scale it to mimic different movements and poses. Once the animator is satisfied with a certain position of the model, they save those positions on the timeline.

Notice that not all 3D artists can cover all aspects of 3D character design. Some focus only on modeling, while the others take on riggning and animation.

Instead of using 3D modeling, the VFX stage leverages physics-based simulation to create more complex elements of a 3D game such as explosions, fluids, fur, etc. They use high-end effects software such as VEGAS Effects.

Effective lighting heightens a scene by depicting the location, time of day, mood of the shot, etc. The idea is to make the shot and the 3D model look more realistic and convincing. An expert lighting artist can use lighting to manipulate the viewer on where to focus when exploring the game environment or the 3D model character.

This is the final part of the production stage, where every scene is rendered separately in layers, including backgrounds, foregrounds, colors, objects, highlights, shadows, etc. Rendering a single scene can take as little as a few seconds to complete or as many as several days, based on the scene's complexity. Once rendering is complete, the production process moves to post-production for fine-tuning and final tweaks.

Many professional 3D artists utilized separate hardware for rendering - this allows to continue modeling on the main machine, while the rendering can take hours on the secondary one.

The post-production stage is the last stage of a 3D game character pipeline. All final details and polishes happen at this stage, and the game development team renders the final product. They add the final touches to make the project look professional and polished. In composting, game developers bring together all the rendered 3D elements. They then color-correct or color-grade the composite images to even out any coloration and create a polished, consistent, cohesive look.

This is the end of creating 3d character model that the players can play on their gadgets. The game development process continues even after production is done and the game has shipped; some team members shift to maintenance (creating patches and fixing bugs)  and creating downloadable bonus content. Other artists can move to the next project. Often, debriefs or post-mortem discussions are held to determine what worked and what didn't and how the game development team could improve the process and output for the next project.

If you’re looking forward to creating 3d characters, feel free to drop us a message!